Students sit at their desks in the Hebrew school in Sofia. 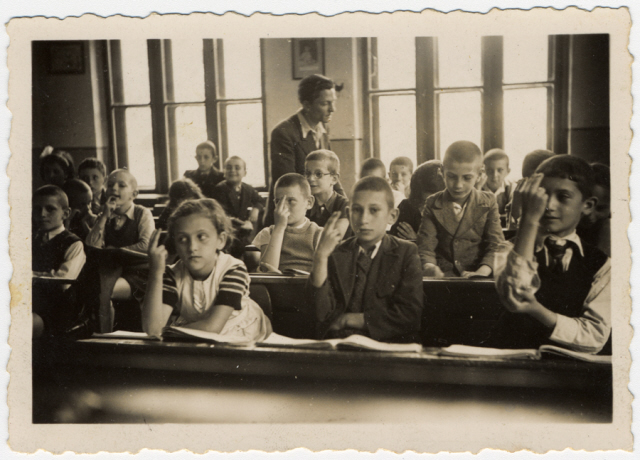 Among those pictured is Albert Farhi and the teacher, Mr. Peretz.Albert Farhi is the son of Nissim and Karolina Farhi, both from Shumen. Albert was born on May 15, 1929 in Sofia, Bulgaria and had two brothers. His older brother David was born in 1924, and his younger brother Moise (Mike) was born in 1933. The Farhi family resided in the same building as the Bulgarian Chief Rabbi, Asher Hananel. Albert's father attended a military academy in Sofia and served as an officer in World War I, commanding a machine gun unit on the Macedonian front. After the war, Nissim worked as a self-employed banker. He also played the violin and was one of the founding members of the Sofia Jewish Symphony Orchestra. In his youth, Albert and his brothers attended a private Jewish elementary school, and David went on to attend the American College near Sofia. In July 1940, the Bulgarian Legislature introduced anti-Jewish legislation that prohibited Jews from owning businesses or intermarrying. The legislation also mandated curfews, wearing the Jewish star, and relocation to the ghetto. However, though Nissim lost his business, he was able to keep his home, and the Farhi family did not relocate to the ghetto. In 1941, all Bulgarian Jewish men between the ages of 20 and 40 were conscripted for forced labor. Unlike in other countries, Jewish officers retained their status and socialized with non-Jewish officers. Nissim wore his officer's uniform and worked in the canteen, supplying food for the soldiers. On one occasion, while wearing his uniform, he walked down the street accompanied by Albert, and a group of German soldiers enthusiastically saluted him. Later in 1941, the Nazi party pressured the Bulgarian government to prohibit Jews from serving as officers. By then, Nissim was too old to be conscripted for forced labor and was allowed to go home and keep his uniform. Shortly afterwards, Jewish citizens were required to register their belongings with the government; fortunately, the Farhi family was able to entrust some of their valuable possessions to non Jews for safekeeping.

In May, 1943 the Bulgarian government ordered the deportation of Jews from the capital, Sofia. Jews were given three days to prepare; each person was allowed 25 kilos of luggage for their journey. Karolina entrusted her husband's uniform to her neighbor Mrs. Durvov who promised to keep it until their return. They entrusted the family piano was entrusted to a Christian relative of another Jewish neighbor, who later promptly delivered it back. Albert went to the American College to bring his brother David home. David and the other Jewish students had been unaware of the deportation order. From Sofia, the family was deported by train to Pleven. They arrived in the middle of the night and were greeted by the president of the Jewish Congregation, Mr. Pinchas, who allowed the deportees to live in his home. While in Pleven, Albert and his brothers performed some manual labor, and David also collected money on behalf of local partisan groups. After a few months, the Farhi family moved to Shumen to stay with extended family. There, Albert attended a Bulgarian High School, and the family participated in Jewish communal activities. They remained in Shumen until the end of the war. After the Red Army entered Bulgaria on September 9, 1944, Nissim returned to Sofia to examine their apartment, which had been damaged during the aerial bombardments and search for their belongings. He managed to recover a list of their items that had been sold at auction. Using this list, Nissim contacted the buyers and recovered their belongings. Throughout their absence, Mrs. Durvov kept Nissim's uniform and returned it after the family's return to Sofia. (Albert Farhi donated this uniform to the USHMM in 2007.) In February 1949 Albert moved to Israel and joined the Hagana. Shortly afterwards, his parents and younger brother immigrated to Israel. His older brother David went to Paris after the war to study at the Sorbonne and then later also moved to Israel.