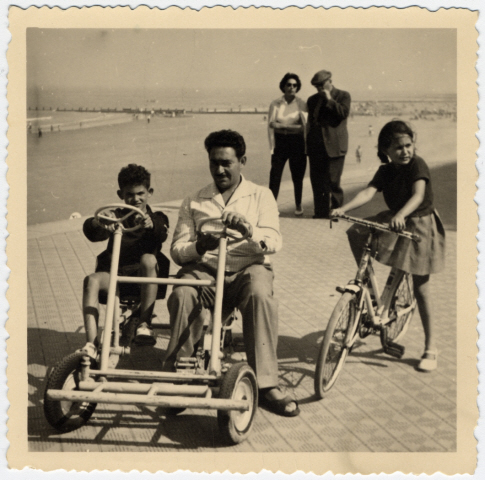 Pictured in the cart are Dominique Vidal and his unle Albert. On the right is his cousin Dany,Haim Vidal Sephiha is the son of David Nissim Sephiha and Ester Sephiha nee Eskinazi (b. 11/9/1881). Haim was born in Brussels on January 28, 1923 to a Judeo-Spanish family of Turkish origins. His father manufactured Oriental rugs. Haim had three older sisters Elise, Adele and Germaine. He also had an older brother Albert (b. 1921) and a younger brother Jacques (b. 1925). At the time of the German invasion of France, Elise was married to Elie Ariel and had a daughter Claudine. Adele was married to Jacques Nathan and then after war she remarried Guelfi Ascagno. Germaine's fiancé Robert Segura was killed during the initial days of the Nazi invasion of Belgium. Albert was engaged to his cousin Claire but she later died following deportation to concentration camp. In 1941 Haim studied agronomy at Jembloux but was expelled because he was Jewish. He then went to the Chateau de la Ramee, a horticultural school in the south of the Walloon province of Braibant created in 1941 after Jews expelled from other agricultural institutions and supported by the AJB (Association des Juifs en Belgique). Haim also belonged to the Gordonia labor Zionist youth movement. In 1942 and 1943 most of the Sephiha family was rounded up and sent to concentration camp. Haim was sent to the Malines transit camp in 1942 and then deported to Auschwitz-Birkenau on March 1, 1943. He was liberated from Bergen-Belsen on April 15, 1945. Jacques and his father David Nissim were rounded up and taken to Malines. Since they were Turkish citizens they received special treatment and were then deported to Buchenwald instead of Auschwitz, arriving on December 15, 1943. There Jacques became involved with the Communist underground. In late March, 1945, both of them were evacuated from Buchenwald, and after 21 arduous days of travel by foot and train, they arrived in Dachau. Both had caught typhus and David Nissim died the day after Dachau was liberated by the Americans. Jacques was unconscious at that moment, but a Belgian priest told him that his father had died and that he had recited a kaddish over the corpse. He was eventually liberated from Dachau and after his recuperation he immigrated to Palestine. His father David Nissim also was sent to Buchenwald, but he did not survive. His mother Ester, together with Germaine and Adele, were deported to Ravensbrueck as Turkish citizens in December 1943. Of the immediate family, only Elise and her husband Elie Ariel escaped deportation. Upon his return to Belgium, Haim discovered that his Christian girl-friend, Micki, had married someone else. Haim became very despondent and wrote "Back from hell, a homecoming full of hope but also full of bitterness. The bitterness had moved in and taken over. Bitterness of solitude and of a suffocating loss. Crime and punishment." However at the same time, Haim worked to regain his life. He resumed his studies in natural sciences at Institut Chimique de Rouen and graduated in 1948. Haim married Jacqueline Wolff and their son Dominique was born in 1949. Haim worked for several years as a chemical engineer in Rouen but later switched to linguistics. In 1963 he joined the faculty of the Sorbonne and became an international authority on Judeo-Espagnol.