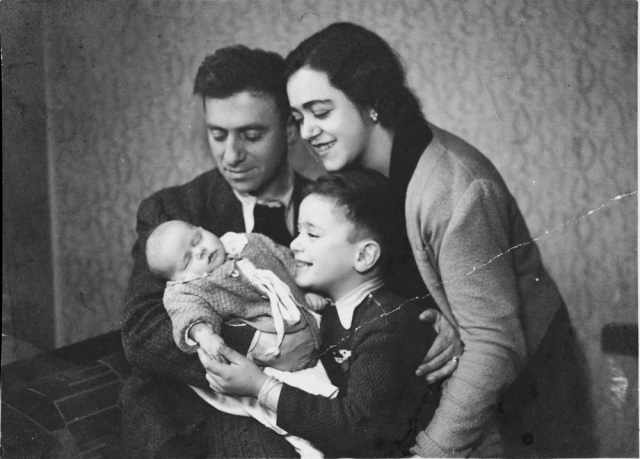 Menashe (now Misha) Avramoff is the son of Gabriel Avramoff (b. April 3, 1903) and Victoria (Vicky) Ashkenazi Avramoff (b. January 21, 1917). He was born on March 21, 1939 in Sofia, Bulgaria where his father was ran a successful business importing and exporting stainless steel cutlery. Victoria and Gabriel married in 1938. Gabriel frequently traveled to Vienna for work, and he spoke German fluently. The family was assimilated and not particularly Zionist, but they celebrated some of Jewish holidays. In early March 1941, Bulgaria joined the Axis alliance. Despite that, Bulgarian Jews were relatively secure from the threat of deportation. However, all Bulgarian Jewish men between the ages of 20 and 40, including Gabriel, were drafted for forced labor. Gabriel, who could converse with the guards in German, was able to leave on weekends. He once went to visit his family when a policeman came to the house, inspected it, and escorted him away. In 1942, the family left Sofia and moved to Rusé, the third largest city in Bulgaria, where Victoria's mother lived. Victoria and Misha moved into a large spacious house belonging to her aunt, her mother lived a few blocks away. On December 20, 1944, Victoria gave birth to a daughter, Adela (now Adele). The entire family, like most Bulgarian Jews, survived the war.