A group of Jewish refugee children living in an apartment house in Kavaja, Albania pose with an Italian soldier who is their tutor. 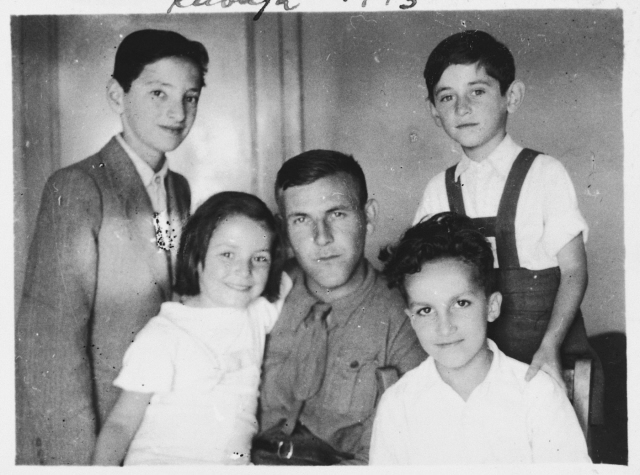 Among those pictured are Jasa Altarac (bottom, right), Gavra Mandil (top, right) and Irena Mandil (bottom, left).Jasa Altarac is the son of Mimi (Finci) and Majer Altarac. He was born January 1, 1934 in Belgrade, where his father was a prominent architect. Jasa had one sister, Lela. The Altaracs were well-to-do and highly assimilated, but the family retained many Jewish traditions, including the yearly celebration of Passover with Majer's family in Sarajevo. During the Passover holiday of April 1941, Majer's family home in Sarajevo was destroyed during a German bombing raid. Though most of the extended family escaped unharmed, Jasa's sister and grandmother were both killed. Soon after the bombing, the city was occupied by German troops, and the Altaracs fled to Sabac, where they were sheltered by the family of Miloje Markovic, one of Majer's foremen. In July 1941 the Altaracs moved back to Belgrade. Upon their return, the family had to register with the police, and Majer was taken for forced labor. At this time the family prevailed upon Majer's business partner, Ermino Dorio, to secure papers that would allow them to move to the Italian-occupied zone of Yugoslavia. When these documents were late in coming, the Altaracs fled without them. They went to Skopje, Macedonia, where they were given lodging by a Jewish family named Amarilio. Their stay in Skopje was cut short, however, when Majer was recognized one day on the street. Fearful of being reported to the police for his illegal presence in the city, Majer fled with his family to Pristina in Italian-occupied Kosovo. Initially, the Altaracs lived with a Serbian family, and subsequently with a Jewish family. However, the situation soon changed for the worse as the Italian authorities came under increased pressure from their German allies to turn over the growing numbers of Jewish refugees in Pristina. In an attempt to meet their demands half-way, the Italians decided to concentrate all the Jewish non-residents in one location. First they were placed in an abandoned school, and later, transferred to the city's main prison. While prison life was unpleasant for the refugees, it was far better than living under German occupation. The refugee families were able to remain together, and they were separated as a group from the regular prisoners. During the day they could stay in the prison courtyard, which provided a place for the children to play. The Altaracs became friendly with another refugee family from Serbia named Mandil. Mosa Mandil, a professional photographer, gradually won the friendship of the prison commandant. He received permission to go to the market each day, thus ensuring that the refugees received enough food. He was also able to arrange for the supply of Kosher for Passover food to the prisoners. By the late spring of 1942, however, the Italians could no longer disregard German pressure to hand over the Jewish refugees, and 51 prisoners were transferred to German custody. This group, which included Jasa's Aunt Frida and cousin Dita, were subsequently killed. On July 8 the Italians decided to intern the remainder of the Jewish prisoners in several locations around Albania. The Altarac and Mandil families were among a group of 18 prisoners (from five families) that was sent by truck to Kavaja. There, the Jewish families were required to report to the police station every day, but otherwise were left alone. The five families (the Altaracs, Borgers, Azriels, Mandils and Ruchvargers) rented several apartments on the top floor of one building that they dubbed the "Red House." Jasa had many playmates in Kavaja and received regular schooling, first from an Italian soldier who came to the apartment, and later at an Albanian school. In September 1943, the Altaracs decided to move to Tirana. While they were travelling by taxi to the capital they witnessed the capitulation of the Italians and the immediate occupation of Albania by the Germans. Once in Tirana, the family rented a small apartment in a secluded house. They were soon joined by Jasa's cousin, Sida Levi, and her son, Mikica. (Sida's husband had been executed in Belgrade.) Jasa's mother started to sell garments in town in order to earn some money for the family. Through this work she met an Albanian woman, Ganimet Toptani. Ganimet and her husband Atif offered to hide the Altarac family in their country mansion in Kamza, about one hour from Tirana. The Altaracs agreed and moved in February 1944. They remained there until August, when news of the presence of Germans in the immediate area prompted Jasa's mother and cousins to return to Tirana. Soon after they left, the Germans arrived and detained Jasa and his father. However, they quickly released them after their search of the mansion turned up some Nazi propaganda which the Altaracs had carefully planted. After the Germans departed Jasa and his father rejoined their family in Tirana. Following the liberation of Tirana in the fall of 1944, the Altaracs returned to Belgrade, where they remained until their immigration to Palestine in 1948. In 1960 Jasa married Enica Franses, a survivor from Skopje, Macedonia, who had also survived the war in Albania.