Portrait of a Romanian Jewish mother and her two children sitting on a bed. 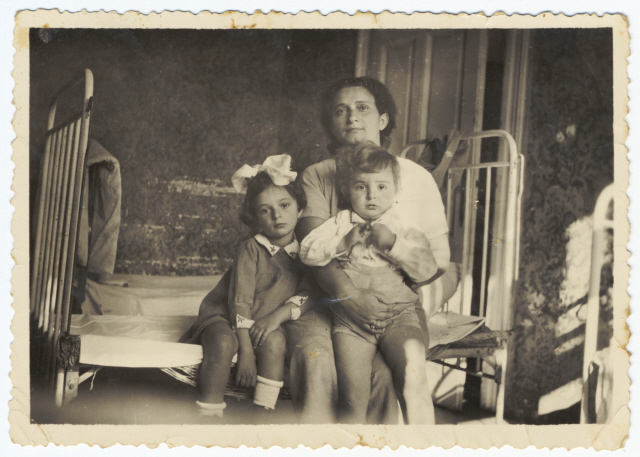 Pictured are Tirza, Slima and Shneur Engler.Shneur Engler (later Elgar) is the son of Baruch and Slima Schechter Engler. He was born on June 12, 1930 in Cernauti (Czernowitz), the capital of Bukhovina, where his father was a timber merchant. His sister Tirza (later Doron) was born on July 4, 1928. The family was religiously traditional and very Zionistic. Until 1940 Shneur attended the Safa Ivria, Hebrew language school, and his sister attended the Meisler shule, a private girls' school. After the Soviets occupied Cernauti, in 1940, they outlawed Hebrew education and Shneur had to attend the Yiddishe shule #5. On July 5, 1941, Germany occupied Bukhovina. Three months later, on October 11, they forced Cernauti's Jews into a ghetto and later rounded-them up for deportations to concentration camps in Transnistria. The Englers managed to escape deportation. After living for only a month and a half in the ghetto, they returned to their apartment and lived by bartering their valuables for food. In 1942 they received a summons to appear for deportation. They were arrested in the middle of the night and taken to the railroad station with whatever personal possessions they could carry. After they boarded a cattle car, they heard someone call their name. Through a window they saw Slima's sister Malka, accompanied by a Romanian soldier who pulled them off the train. Malka had promised the soldiers a sizeable sum of jewelry in exchange for their freedom. The Englers were among some 10,000 Jews who received passes granting them the right to remain in their apartment. A tutor privately instructed Shneur and Tirza. In March 1944 as the Russian front came close to Cernauti, the family escaped. They received four immigration certificates to Palestine, and with the collusion of Romanian authorities they traveled by cattle car to Constanza. There, they boarded the ship, the Milka, and one week later reached Constantinople where the Jewish Agency met them. The Englers traveled by train through Syria and Lebanon and eventually reached Palestine on April 4, 1944.