Studio portrait of an elderly Jewish couple in Salonika. 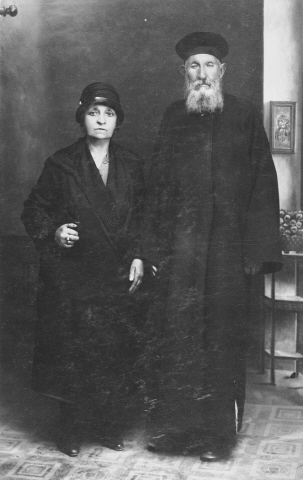 Michelene Frances (now Mathilda Klapholz) is the daughter of Moise (Maurice) and Buena (Beatrice) Frances. She was born on May 25, 1932 in Brussels where her father was a merchant. Both of her parents were Sephardic Jews from Salonika Greece. Her older brother Elie was born in Salonika on November 12, 1928 shortly before the family left Greece. The Frances family first came to Holland before settling in Belgium in 1930. In May 1940, Germany occupied Belgium. In 1942 they were required to wear yellow stars, and in November 1942 they were forced to leave their apartment and go into hiding. Moise traded some goods to a German woman in Liege who agreed to hide the family in exchange. Michelene and Buena stayed with Mrs. Kramer, and Moise and Elie lived with her daughter, Mrs. Schnitzler. While the Frances family was in hiding, someone wrote a letter to the Gestapo denouncing them. Luckily, sympathetic postal workers opened the letter and read its contents. They held on to the letter for over ten days before delivering it. In the meantime they brought the Frances family provisions, warned them that they were in danger and gave them time to find a new hiding place. After liberation, at the end of December 1944, the family returned to Brussels. They stayed in a hotel for a few weeks and then rented new apartment. Michelene married Victor Klapholz (originally from Krakow), in Brussels in March 1953.