Studio portrait of a large family of Greek Jews from Ioannina discovered crumpled on the floor of their ransacked home after the war. 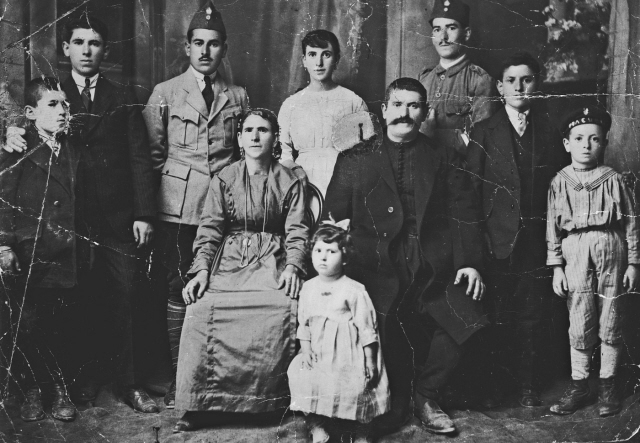 Pictured are members of the Matsas family. Seated are Sarina and Nahoum Matsas and Rebecca (b. 1916). Standing from left to right Eliasaf (b. 1910), Leon (b. 1902), Raphael (b. 1899), Rosina (b. 1904), Jeshua (b. 1896), Elias (b. 1907) and Michael (b.1912).Michael Matsas is son of Leon (b.1902) Matsas and Esther nee Cohen (b. 1907). He was born in 1930 in Ioannina, Greece where his family had lived for over 300 years manufacturing cheese and wine. Leon, however, became an employee of the National Bank of Greece. His mother was born and raised in Albania. In 1935 the bank transferred Leon to the nearby city Arta, where Michael attended a Jewish elementary school. His younger sister Ninetta (now Feldman) was born in 1938. The following year the family moved to Preveza and one year later to Agrinion. There, since Michael was only one of two Jewish students in his new school, he joined the Fascist National Youth Organization (EON) like all his classmates despite the fact he was Jewish. On October 28, 1940 Michael arrived at school to hear the principal announce that Italy had invaded Greece. Michael's father was mobilized into the Greek army a few months later, and the family returned to Ioannina to stay with Esther's sister and husband, Eftyhia and Nissim Samuel. After a successful Greek counterattack, Germany invaded Greece in April 1941. Leon returned home a few days later, and the family returned to Agrinion. Despite the changing political conditions, the winter of 1941 passed very peacefully. The following year, Michael's mother went to pay an extended visit to her siblings in Ioannina and her parents in Albania. She took Ninetta but left Michael at home. Michael never saw those relatives again. In 1942 heads of Jewish families had to register with Italian police. In April 1943 the Matsas family learned of the deportation of Jews from Salonika. Half a year later, Italy surrendered and German troops entered Agrinion in September 1943. Since Michael's father suspected that conditions would worsen, he requested permission for a leave of absence from the bank should that become necessary. Leon also hid the family's religious items and books in the bank's archives. (The family successfully retrieved them after war). Then after learning that many Jews in Athens were going into hiding, Leon decided to follow suit. The Matsas family decided to flee to territory controlled by the partisan group, ELAS (Ellenikos Laikos Apeletherotikos Stratos). They were assisted by Christos Bokoros who was both a friend and a resistance leader. The family left Agrinion on October 3, and only two days later two Germans came to the bank seeking Leon. The Matsas family fled to the remote village of Psilovrahos in an area controlled by partisans and rented a place to stay. The mayor of the village obtained German identity cards for all the villagers including the Matsas family. Leon modified his name to Leonidas and Esther to Eftyhia. Leon maintained contact with his banking colleague Dimitrios Pipiringos who sent them additional household items. They also communicated with their relatives in Ioannina urging them to go into hiding. Unfortunately, their family, feeling a false sense of security, decided to remain in their own homes. On November 6 the Matsas family heard that a German column was advancing on their village. They fled to higher, more remote ground along with three other Jews until the danger passed. When they returned to the village, they discovered that many of their belongings had been looted. Suddenly they became the poorest family in the village. Without enough provisions to last the winter, they suffered from starvation. In March 1944 Michael's mother went close to Agrinion to get food and came back with news that the Jews had been arrested in Ioannina. She and Michael then traveled to the British mission to ask for support in obtaining their relatives release, not knowing that they were already dead. The British took no action. Their hunger subsided with summer harvest but they suffered from malaria. By the summer of 1944, the Allies advanced on the Balkans. After the Germans abandoned Greece, the Matsas family returned home in October 1944, and Leon returned to his position at the bank. Esther's family in Albania also survived. Her parents Joseph and Gracia remained in their home in Delvinon, Albania throughout the German occupation. However, because Albania immediately came under Communist control, Michael never was able to see his grandparents again. In 1956 Michael came to the United States to continue his dental studies and remained in America. His sister followed in 1959, and his parents immigrated to the United States a few years later. Approximately 126 close relatives of the Matsas family perished in the Holocaust, including Esther's two sisters and their families.