A young Jewish woman poses next to the piano in her home. 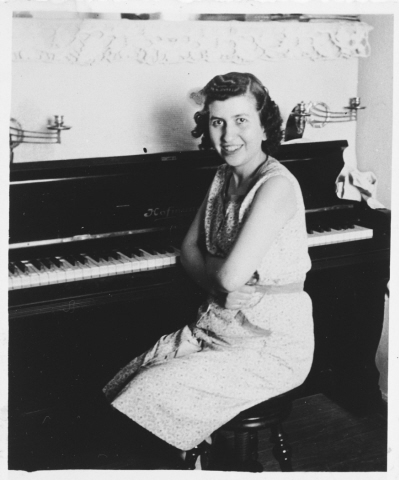 Pictured is Aime Levy.Dora Levy (now Saltiel) is the daughter of Sarina (Perahia) and Salomon Izhak Levy. She was born January 3, 1928 and raised in Salonika, Greece, where her father, together with his brother Haim, owned a prosperous hat and shirt manufacturing business. Dora had six siblings: Aime (Zafira, b. 1917), Isidore (Izahar, b. 1919), Albert (Avram, b. 1921), Alice (Delicia, b. 1923), Samuel (b. 1925) and Joseph (b. 1931). Aime married Leon Cohen in June 1937 and had a daughter Rachel (b. March 1940). Like the majority of the Jewish community of Salonika, the Levy family was Sephardi. The older members of the family spoke Ladino (Judeo-Arabic) while the children preferred to speak Greek among themselves. Their comfortable life was interrupted by the outbreak of World War II. In 1940, Dora's 19-year-old brother Isidore, who was then serving in the Greek army, was killed in action fighting against the Italians. The following year, in April 1941, German troops invaded Greece, and within a few days had occupied Salonika. The German authorities quickly imposed a set of repressive measures on the Jewish community. Apartments were confiscated, the Jewish hospital was expropriated, Jewish newspapers were suspended, and the cultural and literary treasures of the libraries and synagogues were looted and shipped to Frankfurt. On July 11, 1942, 9,000 Jewish males between the ages of 18 and 50, including Albert Levy and Leon Cohen, had to assemble in the Plateia Eleftheria (Liberty Square), where they were forced to stand in the hot sun all day and perform calisthenics. About 2,000 of them were then taken for forced labor. The Germans also conscripted Jewish high school students, including Dora, to help conduct a census of the Jewish population of Salonika and to distribute yellow stars. Subsequently, the Jews were forced to move into one of two ghettos established in the city. The Levys moved into the apartment of Jacob Pelossof, a friend of Dora's father from his hometown of Larrisa. They shared the space with another couple from Larissa, the husband of which had been a Greek senator and a member of the Jewish council. Since Dora spoke Greek without an accent, she often would take off her yellow star and do errands for her parents and neighbors, even after curfew. Though at first Solomon and Haim could leave the ghetto to go to their store, the Germans soon rescinded that privilege. When the Jews could no longer go to work or buy and sell goods, the ghetto population began to starve. At this time Salomon was instructed to report to his store in the company of a policemen in order to take inventory of the merchandise. He and his brother then were forced to sign a letter stating they were voluntarily transferring their business to the Germans. While conducting the inventory, Salomon managed to retrieve some money and hide other valuables with the Christian shopkeeper next door. In the spring of 1943 the Germans began to deport the Jews of Salonika to Auschwitz. The Levy family decided to flee from the ghetto at the urging of the former senator who shared their apartment and had access to more information. Salomon and Haim hired a guide to take the family to Athens, which was then under Italian occupation. They found a spare basement room for Sarina and Dora in a building owned by Anna and Periklis Boutou, located a few doors up from Gestapo headquarters. But Salomon and Haim had to live elsewhere. Aime hid separately with her husband and young daughter, Rachel. Albert lived in a medical laboratory, where he worked in exchange for his room and board. In emergencies Dora and her mother pretended to his patients. Shortly after arriving in Athens, Alice met Isaaco Zivre who worked for an Italian company. They were married that spring. Dora suffered greatly from the lack of food and clothing. In order to make do she and her mother learned to make their own shoes from braided rags. At her mother's urging, Dora apprenticed herself to a young dressmaker named Fedra. Though she was quite poor herself, Fedra did whatever she could to help Dora, including sharing what little food she had. In the meantime the Boutou family took on more boarders including a young lady named Anoula who worked for the city welfare department. Anoula knew the Levys were Jewish and arranged for Dora's brother Joseph to go to a camp at a monastery run by the city in Kessariani. He stayed there until December 1944. After the liberation of Athens by the British in October 1944, the Levys were prevented from returning home to Salonika by the outbreak of the Greek civil war. The family continued to live in a very deprived state in Athens until their return to Salonika in March 1946. When they finally arrived, however, they discovered that all of their former possessions were gone. To escape the postwar food and housing shortages, Joseph and Aime sent their daughter Rachel to Palestine on the Youth Aliya program. Albert immigrated to Palestine illegally. In 1945 Dora reconnected with an old acquaintance, Salomon Saltiel, the son of her mother's best friend. Salomon (b. 1916), was the son of Moshon and Rivka Saltiel. Salomon had been drafted into the Greek army in 1939, at which time he served a brief tour of duty. He was recalled into service in 1940 to fight against Italy. He was soon captured and spent the next five years in Italian and German POW camps. During his absence the rest of his family was killed in Auschwitz. After the war Dora's mother asked her to contact Salomon through the Red Cross to let him know that their family had survived. Upon his return to Greece, Salomon met Dora, and the two immediately fell in love. They married on August 10, 1947 and immigrated to the United States in 1955. Dora's parents followed them to America the following year.