Three children stand on a city street in Budapest. 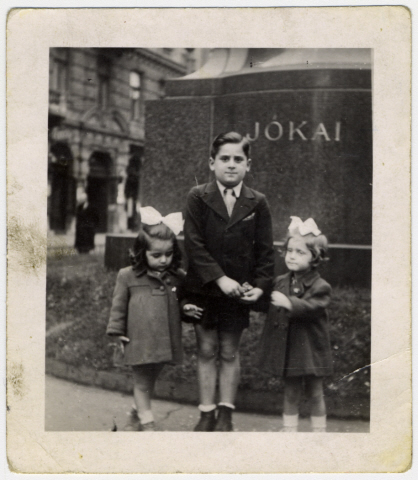 Pictured left to right are Agnes Biel, Ervin Biel, and cousin Eva.Agnes Biel is the daughter of Katalin and Dezso Biel. She was born on May 8, 1938 in Budapest, Hungary. Her father was in the retail clothing business, and her mother Katalin took care of Agnes and her older brother Ervin. During the holiday season, she worked in retail sales and made some extra money. When Agnes was about five years old, like all other Jewish people, she was required to wear a yellow star on her outer clothing. Later, the family had to move from the apartment they occupied to a designated area for Jews only. Luckily, her uncle already owned an apartment there, and they were able to move into a one bedroom unit. While living in that apartment, soldiers came and regularly selected people for free labor. Usually, the men or women were brought back in the evening. One time, Anges' father was taken to work at a brick factory, yet never returned. It was the last time Agnes saw her father. After the war she discovered that he died in a concentration camp in Felixdorf, Austria. Before the ghetto was formed in Budapest, Agnes' mother Katalin, acquired false identification for all of her family. She packed the few things she could carry - family pictures, documents, jewelry, and money. She walked out of the apartment with her two children and spent the following months hiding in private burial plots in a cemetery and an ice cream factory. The documents they had obtained helped them find refuge for some of the nights in protected houses for the traveling foreign citizens. After some time, the false documents no longer worked because so many others had similar false identifications. Katalin discovered a new hiding place in a Catholic orphanage; she worked as a kitchen maid and Agnes was cared for by the nuns. However for unknown reasons, Agnes' brother Ervin, had to stay with the soldiers guarding the orphanage. Agnes was very frightened during her stay, as sirens sounded for bomb scares frequently and she did not often see her brother. She shared a bed at night with her mother. Before the war ended, the Soviet and Nazi armies were both in Budapest, fighting their way from house to house. Many civilians were killed in the crossfire. Should it be discovered that they were hiding Jews, everyone at the orphanage would be in danger. So, Katalin and her two children left the orphanage in January 1945. It was their goal to make it to the suburbs of Budapest, as those areas were liberated. Traveling on foot was slow and difficult. Due to the lack of food and clothing, they were exposed to the elements of a harsh winter, hunger and fear. While wandering, they encountered the Soviet army and were brought back to the already liberated Budapest on January 18, 1945. Since none of Katalin's family survived, she decided to emigrate. She applied for a passport to the United States, where she had family. While waiting for the visas, Agnes started school and graduated in June 1956, and her brother Ervin finished school and in December 1956 was called for army service. The family escaped to Austria where Katalin registered at the US Embassy in Vienna. Exactly one year later, the family received their visas and left for the United States to join family in Boston.