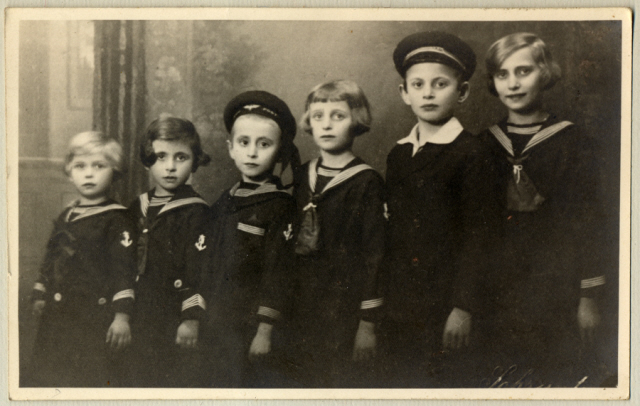 From left to right are Edit, Rose, Marcel, Sara, Jozsef and Gyongyi Kuttner.Laszlo (later Leslie) Blau was born in Budapest on October 9, 1921. His father was born in the small town of Bonyhad. Leslie spent the summer of 1933 visiting his father's relatives, the Barany family, in Bonyhad. He also lived there with his parents in 1934-1935 and attended high school there. During his time in Bonyhad, Leslie became acquainted with the Kuttner family. Miksa Kuttner was born in Mosonszenpeter, Hungary on December 1, 1894. He served as the principal of an Orthodox elementary school in Bonyhad and was married to Debora Weisz. They had six children: Gyongyi (born in 1922), Jozsef (born in 1923), Sara (born in 1924), Marcel (born in 1926), Rose (born in 1928) and Edit (born in 1930). In 1938 Hungary passed its first antisemitic legislation and soon after conscripted Jewish men, including Laszlo Blau, Miksa Kuttner and his sons for forced labor battalions. Miksa served in several locations and eventually was deported to concentration camp. He perished in Dachau. While in the battalion, Marcel contracted an appendicitis, but the surgeon refused to operate on him because he was a Jew. He died one on December 12, 1944 in Tata Hungary, one day before the down was liberated. In March 1944, Germany occupied Hungary and began enacting further anti-Jewish legislation in Bonyhad the following month. On May 12 all Jews were forced into a ghetto and on July 1 they were deported to Pecs. From there they were sent to Auschwitz five days later. Deborah and her youngest daughter Edit were killed on arrival, on July 9, 1944. The three older sisters were selected for forced labor and survived. Joszef Kuttner also perished in Auschwitz. After the war, Leslie's cousin, Erno Baranay, the only surviving member of his immediate family, established the Jewish Brotherhood Council in Bonyhad to care for returning survivors. Laszlo returned to Budapest after the war to live with his mother who had survived with a a Swiss Schutzpas. (His father had perished in the Holocaust on November 23, 1944.) They then moved to Bonyhad after Erno asked if they would assist him in his business since he was busy with communal activities. Soon thereafter the three surviving Kuttner daughters, Gyongyi, Sara and Rose also returned to Bonyhad. Sara established another charitable organization called the sewing shop to sew and mend clothing for returning members of the community. Laszlo and Erno each married one of the Kuttner girls on April 30, 1946 in Budapest; Erno married Gyongyi and Laszlo wed Sara. Laszlo and Sara Blau remained in Hungary under the Communist rule. In December1956 after the Soviet the suppression of the Hungarian uprising, they escaped by foot with their two young children Edith and Bela. After bribing a Russian sentry they crossed the border to Austria and made their way to Vienna. They then proceded on to Camp Roeder, a Hungarian refugee camp near Salzburg on January 7, 1957. There, Laszlo worked as an interpreter and clerk for the Salzburg office of the HIAS. After the camp closed, they immigrated to the United States on August 22, 1957.