The Jewish obstetrician, Dr. László Halmos, stands behind the examination table in his office on Vodna Street in Kosice. 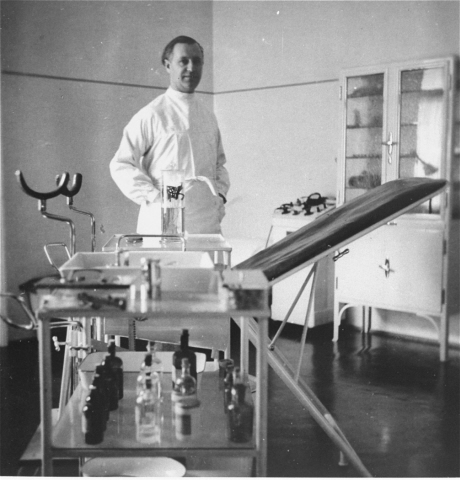 Eva Halmos (now Kuhn) is the daughter of László and Katarina (Kertesz) Halmos of Kosice, Slovakia. Her father, who studied medicine at the Charles University in Prague, had an obstetrics practice in Kosice. During the war Dr. Halmos was conscripted into a Hungarian forced labor battalion, where he perished in 1943. Eva, who was an infant at the time, escaped with her mother to Budapest just before the last deportation transport left Kosice in June 1944. They survived together in hiding in Budapest at the home of Magda Balazs (now Palos). After the war Eva returned to Kosice with her mother, but Katarina soon became ill with hepatitis and died in 1946.