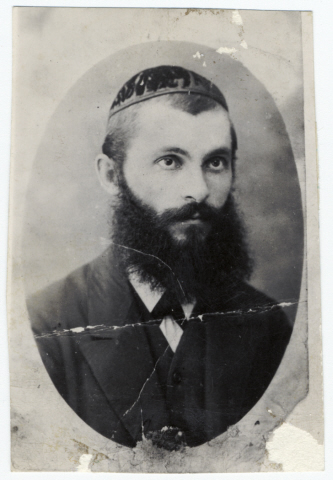 Rabbi Ehrenreich served as Dayan of Humenna and was the editor of a leading Torah journal, Ozar ha-Hayyim. He and his family were killed by the Nazis in Lublin in 1942.

Feigel (Faye) Kallus was the daughter of Avraham Kallus and Gittel Gizela Ehrenreich Kallus. She was born on May 1, 1920 in Munkacs (Mukachevo) in Transcarpathia where her father owned a grocery and dry goods store. Feigel had an older sister Aliza and two brothers, Menachem Monush and Ludwig. In 1939, the Hungarians annexed Transcarpathia, including Munkacs and immediately began introducing antisemitic legislation. However, the area was spared the horrors of direct Nazi rule. This changed suddenly when Germany occupied Hungary on March 19, 1944. Soon afterwards, the Kallus family was sent to a brick factory, and from there they were deported to Auschwitz in late spring. Feigel, together with her mother and older sister, remained in Auschwitz until the camp's evacuation on January 15, 1945 when they were sent out on a death march. They avoided freezing to death (as did many women) by following a cousin's advise to hide in a pig sty to stay warm. The death march brought them to Ravensbrueck and finally to Mauthausen where they were liberated. Though the women of the Kallus family survived, Avraham Kallus perished in Auschwitz, and Monush, was shot while on a death march in front of his younger brother. Many other relatives also perished including Faye's uncle, Chaskel Ehrenreich, his wife and children, and another uncle, Rabbi Chaim Yehuda Eherenreich, Dayan of Humana, who was killed after refusing to serve as a librarian for the Nazis. Faye made her way to Budapest and six months later returned to Munkacs. However as it was already under Soviet occupation, she left Hungary and went to Czechoslovakia. In 1947 Faye married her second cousin, Israel Yaakov Kallus. (They shared a common grandmother, Chaya Kallus.)

Israel Yaakov Kallus was the son of Lajos (Ludwig) and Miriam Kallus. He also grew up in Munkacs where his father owned a distillery. He had an older brother, Mordechai. Following the German occupation of Hungary, Israel Yaakov hid in the woods with false papers claiming he was a Greek Catholic. He returned to town on a friend's advice and found work as a night watchman. However, one day an SS officer confronted him and demanded to see his papers. Israel, who was holding a wrench, threatened the officer who then arrested him and brought him to the train station for immediate deportation to Auschwitz. By coincidence, the last train had just left the platform, so Israel was spared. Instead he was placed in a different train that functioned as a moving jail, and on Simchat Torah he was released to the Jewish ghetto in Budapest. Israel joined the Jewish underground. He was caught in November and brought to the shore of the Danube to be shot. A lieutenant in the underground who was serving undercover as a soldier spotted him. However, he had to obey the order to shoot Israel so as not to jeopardize his disguise. Luckily though, Israel defied death a second time, but jumping in the river prior to the shooting, playing dead and then swimming ashore. The lieutenant later moved to Palestine, joined the Stern Gang and was hanged by the British. Israel's mother and older brother perished in the Holocaust. He and Faye immigrated to the United States in 1950.