Five young Jewish men who are members of a kibbutz hachshara (Zionist collective) pose holding tools at a logging company in Oczmiana, where they are working to learn the trade and finance their collective. 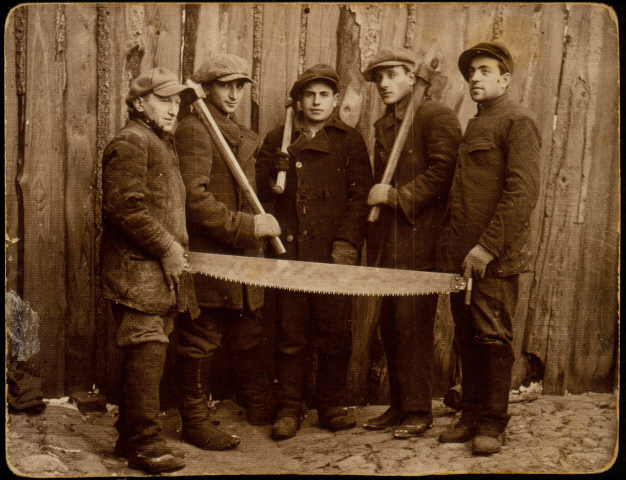 photo rights: United States Holocaust Memorial Museum- NOT FOR RELEASE without the permission of the The Shtetl Foundation

Among those pictured is Yehiel Blacharowicz (left) from Eisiskes. He was killed by the Germans during the September 1941 mass shooting action in Eisiskes.Sara Plotnik (later Avrahami) is the daughter of Eliyahu Plotnik She had twin sisters, Breine and Mikhele. Sara studied nursing in Vilna and joined a Hehalutz hachshara, "Shaharia" in Oszmiana to prepare for immigration to Palestine. In 1938 she married another member of the hachshara, Pesach Abrahamson (later Avrahami), and they immigrated to Palestine shortly thereafter. Sara's father, sisters and most of her friends from Hehalutz were killed during the September 1941 massacre.