Portrait of Mark Maggid with his wife Maria and their oldest son Sasha, at their dacha in the village of Strelna, a suburb of St. Petersburg. 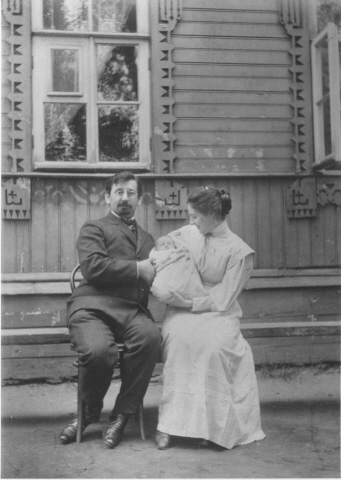 Feodor Mikolaeyevski graduated from the academy of art in St. Petersburg and studied with Prof. Jordon, an engraver. He worked in the military topographical department of the staff of the Russian army prior to taking up photography. He invented a particular "cliché" (stamp) which incurred great interest at the time. He worked as an engraver and photographer, and his works were well received by the specialists dealing with art history and the Imperial Russian Technical Society who awarded him a silver medal. He worked for many publications such as "Monuments of Ancient Russian Architecture", "Journal of Art and Culture" and "Art Treasures of Russia" among others. In the 1890's began working for the Imperial Hermitage, and in 1904 he received a special title: photographer of the Imperial Hermitage, thereby becoming its first and only official photographer. In 1915 another photographer was added to the staff to help him with his duties. He remained in this position until 1917. For the more than three decades he worked for the Hermitage, most of his work focused on portraits and Gallery of the Treasury.