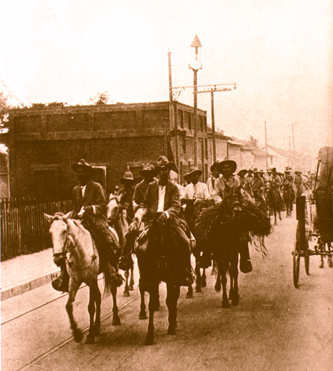 As for the "original" composition of the "La toma de Zacatecas," Esparza Sánchez reports the testimony of a Zacatecan carpenter, Francisco Torres Rosales, who on June 24, 1914, the morning after the fall of the city, received a visit from a group of his friends. After relating that they congratulated him on the fact that his workshop had survived the explosion of a neighboring building (the retreating huertistas blew up the two largest public buildings of the city before escaping with Argumedo), Mr. Torres goes on to say:

. . . they [his friends] suggested to me that I should write some verses about the Capture of Zacatecas, verses that they would print up (they were all typesetters at Espinosa's print shop) and that we would then sell in order to "set ourselves up" [with some money]; already the day before, in order to celebrate the the entrance of the then coronel, Pánfilo Natera, I had whipped up a corrido that we had sold for two centavos a copy and that had made us a little money, and I think that's why my buddies came looking for me to make this particular suggestion; I gladly accepted, and with the details they brought me and those my brother had found out about who had attacked where--since they had already been all over town since very early that morning--I set myself to work in the little bedroom at Medina's [one of his friends] house, and by five o'clock that afternoon the paperboys were running through the streets yelling: "Las mañanitas of the Capture of Zacatecas." The first run was five hundred copies, and while my brother Agustín and José López distributed them to the "newsies," Bardomiano, Gregorio and Miguel were printing up another batch.

The corrido was sung a few days later by the blind singer who used to accompany himself on a two-legged harp--I think his name was Inocencio or Crecencio since they used to call him "El ciego Chencho"--, and it was he that adapted it to the music of "Las mañanas de Miguel Salas." (quoted from Esparza Sánchez, El corrido zacatecano 73-74)

Here we can see the ordinarily unrecorded and anonymous process of the composition of a topical corrido and its production and distribution as an hoja suelta almost as if it were under a microscope. The men who produced this broadsheet and its text are functionally literate members of the urban artisan class--in this case a carpenter/poet and some printers--and probably very typical of the people involved in the production of hojas sueltas during this period in general. Their most immediate motive was monetary, but it would probably be wrong to criticize them as mercenary. Their real sentiments probably lay with the revolucionarios--at least in contrast with Huerta, who was pretty generally abhorred by all but a few of the old landowning and industrialist classes--, and Torres Rosales seems to have particularily resented the wanton destruction of the Palacio Federal by the huertistas since he devotes two of his twenty stanzas to the subject.

Torres Rosales' reference to having composed another corrido only the day before " . . . con motivo de la entrada a esta capital del . . . coronel Pánfilo Natera . . ." suggests to us vividly the reason why such a ready market existed for his broadsheets at this particular moment and why it was necessary to work with all possible speed. The city was being entered by thousands of irregular troops who had just fought a horribly bloody battle and suffered high casualties to gain the victory. The inhabitants would no doubt have wanted to express their sympathy with the victors, to celebrate their leaders and triumphs--to "bond" with them as it were--as much as possible if only to avoid seeming like "fair game"--legitimate spoils. Perhaps the most obvious sign of this in Torres Rosales text is the final stanza, one which, of course, quickly disappeared from subsequent versions, displaced by other, more perdurable despedidas as the situation no longer demanded such blatant enthusiasm for the victors:
Ya con ésta me despido
Y digo de corazón
¡Que vivan Villa y Natera,
Viva la Revolución!


The victorious villistas themselves would also have wanted souvenirs commemorating their great achievment. Torres Rosales gathered as many specific details of the assault as possible on short notice and wove them into his text--the "who and where" supplied by his brother and his friends' early morning tour of the city. Including Villa and Natera, no less than seventeen of the principal chieftains of the División del Norte are mentioned by name along with some of the main geographical sites of combat in the twenty stanzas, although there is nothing like the detail found in in the seventy-eight stanzas of what Esparza Sánchez calls the "villista version" composed by Arturo Almanza (text in Esparza Sánchez, El corrido zacatecano 74-77). This immediate need to memorialize the various leaders and their respective gente, as the personal warbands were called, illustrates a point made by McDowell. Although many scholars of both the romance and the corrido have assumed that the primary function of the genre was often noticiero, "news-bearing," it is plain here that the true motive is celebratory. The inhabitants of Zacatecas and Villa's soldiers did not need to be informed of what had just occurred--after all, they had just lived through the whole experience, they themselves were the protagonists. As McDowell says of the corrido: ". . . its purpose is to interpret, celebrate, and ultimately dignify events already thoroughly familiar to the corrido audience" (McDowell, "The Corrido of Greater Mexico" 47).

Of course, this is not to say that occasionally the corrido couldn't fortuitiously fulfull a "news-bearing" function. As a number of eye (and ear) witnesses report, within only a few days of the capture of Zacatecas, and while the Huerta-controlled press was still suppressing the news, ambulatory corridistas were belting out various versions of "La toma de Zacatecas" all over Central and Northern Mexico (Esparza Sánchez, El corrido zacatecano 73; Díaz de Ovando, "El corrido de la revolución" 163).

Torres Rosales was a poet, but not a musician, and in any case, the broadsheet never carried musical notation. Thus it was up to the public to adapt the text to music, since the corrido is usually sung, almost never recited. As probably occurred with most corridos that began as hojas sueltas, the "definitive" tune that became attached to the text was already present in the tradition, and the combination of text and music that became "standard" in the tradition was the work of a professional street musician, in this case as in so many others, a blind singer and harpist. 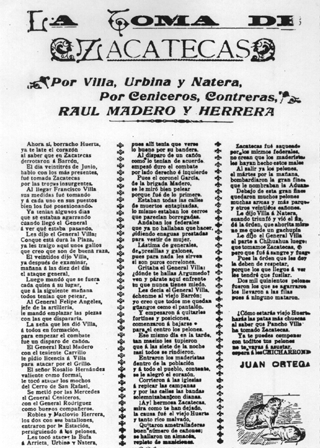