On February 22, 1913, after a brief military rebellion in Mexico City, the federal General Victoriano Huerta, with the encouragement and complicity of the United States ambassador Henry Lane Wilson, had Francisco I. Madero assasinated and assumed the presidency of Mexico himself. Upon hearing of Madero's death, the governor of the northern border state of Coahuila, Venustiano Carranza, declared Huerta's presidency infamous and illegitimate and put himself at the head of a movement to restore constitutional government. Carranza was quickly joined by the government of the border state of Sonora, and the whole north of the country rose up in arms against the usurper Huerta in Mexico City. Francisco Villa, only recently escaped from his Mexico City jail cell, crossed the Rio Grande from his temporary refuge in Texas with eight men in March 1913 and quickly took over control of Chihuahua. Thousands and thousands of former maderistas streamed down out of their mountain hideouts to join Villa as he began what was to become the decisive march down the middle of the country to drive Huerta out of Mexico City.

Benjamín Argumedo and his desperately loyal band of horsemen, perhaps haunted by the odor of villista blood still clinging to their hands from the battles of the year before between orozquistas and maderistas, lost no time in enrolling as irregular cavalry with General Huerta's federales. When Villa's suddenly awesome División del Norte rolled down the railroad line towards Torreón in 1913, it was Argumedo's cavalry, fighting a cruel and seemingly interminable rear guard action, that repeatedly threw back the advancing villistas with incredibly fierce and abandoned charges. "El Tigre de la Laguna" and his valientes seemingly relished the chance to throw themselves against their recent adversaries--and former comrades in arms--, Villa's own most hardened horsemen under the command of his old compadre from back in his pre-revolutionary days as cattle rustler and "road agent" specializing in "liberating" well-guarded mine payrolls: Tomás Urbina. The corridistas celebrated these bloody cavalry skirmishes in typical fashion, reducing a great deal of narrative material into what John H. McDowell ("The Mexican Corrido" 216-19) calls a "speech event" or "verbal exchange"--one of the major oral formulaic themes characteristic of the corrido genre. Thus, in a stanza that occurs in a version of the corrido "La toma de Torreón" alluding to these same events of 1913-14, we find:

Here all of the pounding hooves, clouds of dust and powder smoke, bugles sounding the charge and the retreat, din of firearms and whizzing bullets, and the screams of mortally wounded men and horses, are reduced to a seemingly droll confidence exchanged between two officers. Urbina's allusion to his horse as his "most faithful friend" is a common formulaic way of articulating the theme or motif of flight before an enemy. This kind of dry, ironic wit is very typical of the corrido "speech event". The version of "La toma de Torreón" this stanza is quoted from is a particularily abbreviated one of only nine stanzas and demonstrates a high degree of traditionalization characteristic of the 45 rpm recordings that dominated the genre in the 1950s and 1960s. Interestingly, the first two stanzas of this version are possibly "migrants" from other corridos, but the only mention made of the fierce cavalry battles that preceded the final assault are these four lines depicting the verbal exchange between Urbina and Argumedo.

Despite Argumedo's bravery, Villa was finally able to capture Torreón, although only after paying an inordinately high "butcher's bill." Huerta reconcentrated the best of his forces, including Argumedo's colorados, in the city of Zacatecas some four hundred kilometers to the south along one of the main rail lines leading to Mexico City. Both due to its natural situation and the caliber of the federal defenders, Zacatecas was now the "military heart of the nation" (Aguilar Camín, La frontera nómada 399-400).

Villa's rapid success in the center of the country was disturbing to his erstwhile commander-in-chief, Venustiano Carranza. Carranza refused to make promises of land reform or expropriate large haciendas and so was quickly defeated in his home state of Coahuila. He was able to flee to Sonora, and by devious politicking, make himself the "Supreme Chief" of the Constitutionalist coalition, where he used his power as much to hinder Villa as to defeat Huerta. The localconstitucionalistas under Pánfilo Natera were unable to take the formidable city of Zacatecas by themselves, where their first attacks were resoundingly repulsed by the federal defenders and their colorado auxiliaries. In order to deflect Villa's progress, and perhaps hoping that Villa's penchant for frontal assault combined with the sophisticated defenses would sufficiently cripple the División del norte to allow the armies of Sonora to beat the villistas to Mexico City, Carranza ordered Villa to attack Zacatecas in June of 1914 (Aguilar Camín, La frontera nómada 399-400).

The resulting battle lasted from 11 June 1914 to 24 June 1914, and became one of the most decisive, and celebrated, of the revolution. The federal forces in the city numbered some 12,000, while the aggregate of the villista attackers is calculated to be close to 20,000, including reserves. The smoke from the seemingly endless stream of military trains pouring down the track from Torreón made it seem as if the neighboring valley of Calera was on fire (Esparza Sánchez, El corrido zacatecano 67). Argumedo and his colorados once again distinguished themselves, and when finally all was lost, succeded in breaking through the advancing villista lines with a desperately furious charge, saving the lives of a great number of federal officers whom they were able to escort to safety. "The Lion of La Laguna"'s importance to the battle was memorialized in a stanza that occurs in many versions of the corrido known as "La toma de Zacatecas." Villa's men have broken into the town after a fierce bombardment, the streets are "carpeted" with the dead, and the surviving federales are begging door to door for women's clothing in which to escape. In the immediately preceding stanza the federal officers are accused of cowardice, then Villa himself appears on the scene, riding furiously through the town, searching for his enemies--the federal commander Barrón and his chief of irregular cavalry--, and as the corridista would have it: 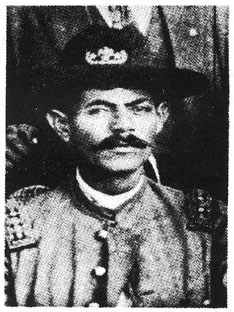 This stanza, also of the "speech event" type, was clearly composed from a villista point of view, and Argumedo's reputation for bravery is used satirically to taunt him for having fled from Villa's troops in Zacatecas. Although it does not appear in the version of "La toma de Zacatecas" that the Zacatecan scholar Cuauhtémoc Esparza Sánchez considers to be the "original" of this famous revolutionary corrido, it can be found in both of the immediately derived versions. It is quite possible that it was composed by the veteran villista Arturo Almanza (Esparza Sánchez, El corrido zacatecano 77). The same stanza turns up in a number of other corridos. Américo Paredes, for instance, mentions it as occurring in "some versions" of "La toma de Torreón" (Paredes, "La médula emotiva" 145).

The fall of Zacatecas proved to be a decisive moment in the Constitutionalist phase of the revolution, and within a few weeks, the usurper Huerta followed his former boss, Porfirio Díaz, into foreign exile. The battle was celebrated in literature as well as popular poetry, and Mariano Azuela, the pioneering novelist of the revolution, devotes chapters 18-21 of the Primera parte of his Los de abajo to an eye-witness account of these events, fictionalized only in the names of some of the protagonists.